You’ve finally installed a new Radeon RX 6600 or RTX 2060, indisputably two of the most reputable GPUs right now. But you suddenly realize that your graphic card is slightly drifting towards the right. More often than not, this is “GPU sag.”

GPU sagging happens when your graphic card is too heavy for the PCIe slot or case bracket to support. Should you be bothered about your GPU sagging anyway? And can GPU sag cause crashes?

Our post today is about GPU sag, whether it’s really a problem, and numerous ways to fix it in your gaming PC builds. On top of that, we’ll touch on the specifics of GPU sag.

The answer is usually yes and no. GPU sag hardly destroys other devices. But both the PCIe and GPUs on your PC’s motherboard must be durable. That way, they can’t break easily.

In some extreme instances, GPU sag has proven to be problematic. In the event some of the connections in the graphics card lose contact with the PCle slot due to extreme sagging, then your PC game will crash. Other parts may stop functioning as well.

Worried about your card sagging? Worry not; the vast majority of GPU manufacturers are testing the units themselves and PCIe slots for sudden movements, case drops, and flexing in general.

Their choice of quality (optimal) materials to construct the cooling solution is aimed at rectifying this whole issue.

Can GPU Sag Cause Crashes?

It depends on the angle your GPU is hanging off at. Extreme GPU sagging can pose a problem. When the card sags too much, it wraps the PCle slot, thus displacing the cooling devices.

In turn, the card overheats and causes a crashing with your PC system. Remember the card is out of place, so the interaction with other delicate PC components causes damage to the piece.

And in case your PC drops while the GPU is sagging, there are high chances your card will break in the process. One more downside of a sagging graphic card is that your display or game could randomly go black. Not fun.

Fortunately, if your GPU sags at an angle less than 45o   the damage is unlikely as PCIe slots and GPUs are made to withstand high stress. GPU sag impact on other PC components is pretty harmless.

Read Also:  Is It Worth Getting A 17-Inch Laptop, Or Are They Too Big to Work On?

It’s no secret that damage can develop from GPU sagging. First off, GPU sag makes your build unsophisticated, and if it sags far enough, some parts of your system can get damaged. They include;

Some argue there will be little to no damage whatsoever. For PC enthusiasts, this is something to worry about. Think of fixing this issue to boost your premier gaming experience.

How To Know Your GPU Has Sagging Damage (Signs)

While the GPU turns your computer into a real graphic rendering machine, sagging should be a concern. Perform a thorough inspection to enjoy many benefits associated with the graphics card, including higher in-game settings, image upscaling, higher resolution, and more.

Sagging issues can be a nuisance, nevertheless. The big question is, “what signs show your card is dying?”

Read Also:  Are Video Games A Waste of Time?

How To Prevent GPU from Sagging

Now that sagging is a common problem with graphic cards, your primary objective should be to fix it. So, what are the effective ways to avoid GPU sagging in your machine builds? Let me walk you through them one by one.

1. Use a GPU support brackets 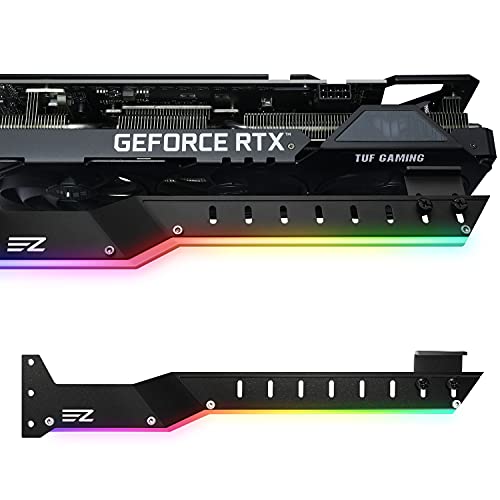 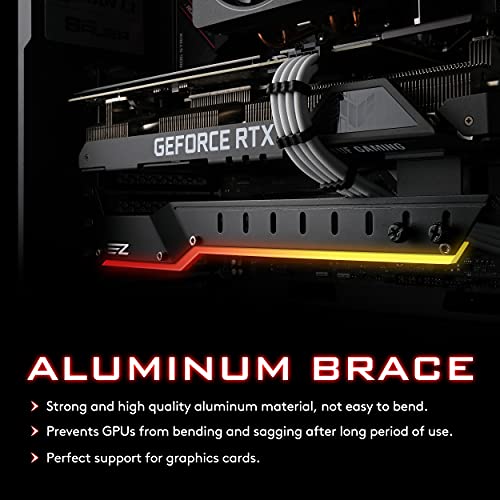 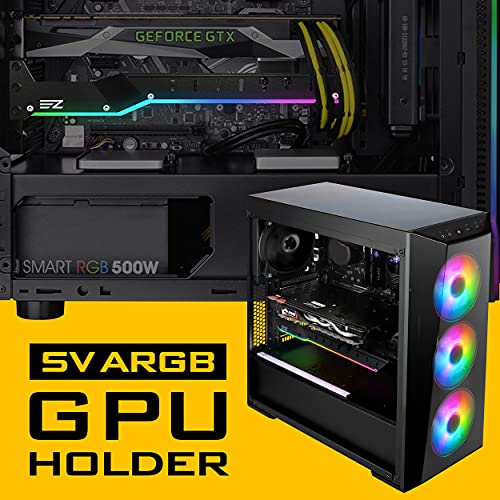 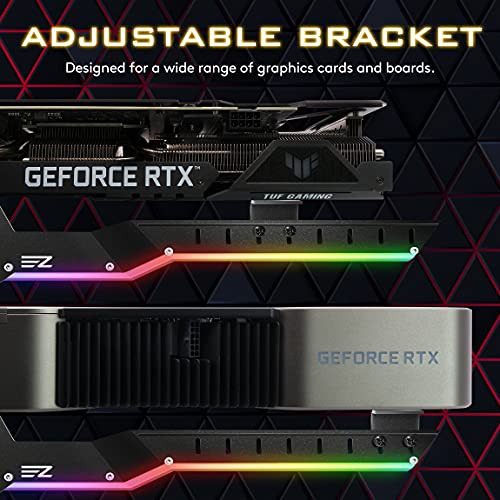 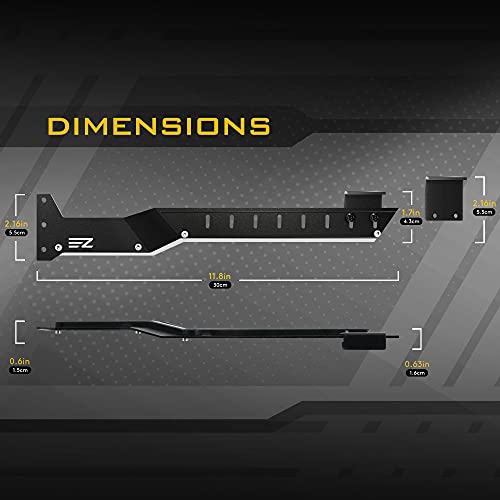 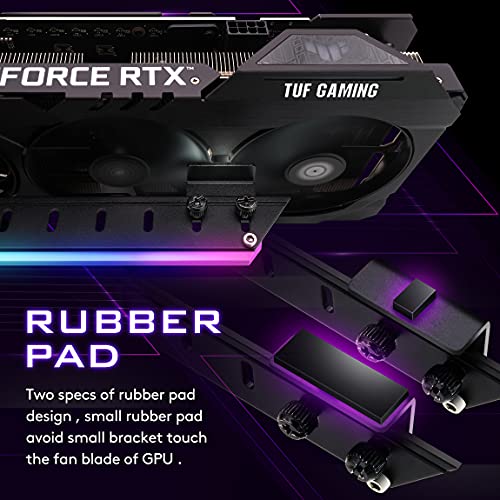 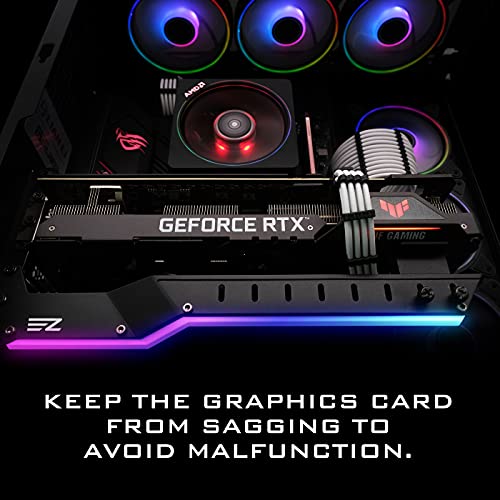 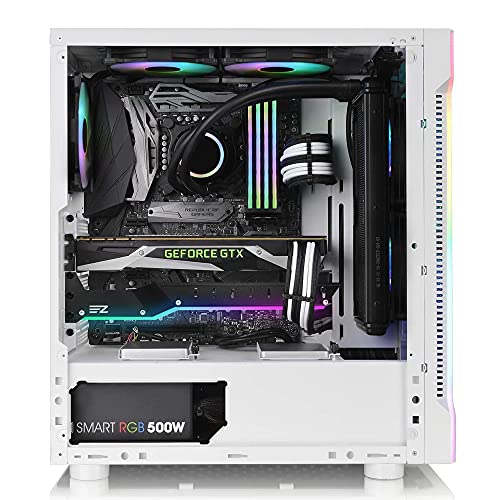 New graphics cards are getting bigger and too heavy for the PCIe case to uphold. As a result, the cards bend a little. Even high-end cards need their own support.

Installing a GPU support bracket on your computer is the most straightforward solution to combating this issue. The mechanism secures the card from this dreaded sag problem.

There are a dozen support brackets out there. All you need is to give it a go. Purchase, and slap it in to give your card an upright position. The process is easy as that.

The brace is appropriate for high-profile graphic cards and will house just one card at a time.

It comes with a stand with a shaft alongside 2-3 customizable sliders. You’re supposed to lock the sliders to achieve a sagging-free graphics card.

A vertical one holds your graphics card more compact than a horizontal one. Having said that, your card will stay more secure than before.

Card owners can as well eliminate sagging by setting up the GPU vertically. You need to invert your computer case and swap cases properly. Adding a vertical GPU mount is another alternative.

Mounting your GPU vertically can sometimes obstruct smooth airflow in the PC case. It’s always advisable to install both the intake and exhaust fan to prevent overheating. 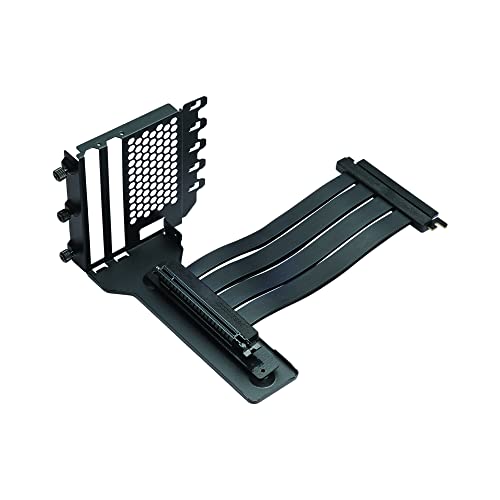 This nifty vertical GPU mount ensures no strain or interaction with other sensitive PC parts such as the motherboard.

Another advantage of routing your card upward is that you’ll have a clear view of it. A better visible card is all you need to enjoy a real performance on the front of your computer. Some folks do it for fun.

3. Hang the GPU with PCI wires

Well, it’s Arguably the simplest trick worth giving a shot. We’ve seen people supporting their sagging cards with some fishing wires. The tension in the cables prevents reverse sagging.

Just take a cable and tie it to the top half of the GPU, then tie it in your PC case. If not a wire, use a strong nylon string. The idea sounds awkward compared to other solutions, but it does come to your rescue.

I’d personally recommend a fishing line. Besides being invisible, the wire is sturdy enough to support several GPUs at a go.

Building blocks is another DIY solution to handle your sagging GPU. Get your Legos and prop the GPU up. Position the solid object underneath your GPU to guarantee upward force. The method looks cheap, cool, and effective in some PC system builds.

Heads up, my gaming PC started crashing from time to time. I tried to reboot my computer thinking I had found the issue. My PC kept on crashing only to find out that extreme GPU sag was the issue. By good luck, I got my Legos and propped the GPU up.

Ever since my PC has performed to the best without overheating.

Applying any of the methods we’ve outlined to fix the GPU sag issue within your PC system.

Hopefully, you now understand how GPU sag occurs, why it happens, and how to fix it. It’s crystal clear that GPU sag is more of a cosmetic issue. So, you should figure out the method that pleases you.

GPU sag can be a bit scary for beginners. Don’t panic because various ways to fix the problem are simple. All the selected fixes in our post are solid. In fact, you don’t need a professional to do it for you. Prepare your tools and get the job done.