If you need to take notes to organize your business or personal life then the Evernote application is one that you will probably think of first. It has been around for a while and many consider it to be the standard for note-taking. Surely more than 250 million Evernote users cannot be wrong?

There is no doubting the capabilities of Evernote. But over the last few years, there have been quite a few changes that have seen users look for an alternative. There have been issues with change management and they have implemented a pricing plan which has angered a lot of users.

There is still a free version of Evernote but it is very basic indeed. There are better features in the Premium plan but this will cost you $7.99/month. If you want to take notes in teams then they have a Business option for two users or more for $14.99/user per month. 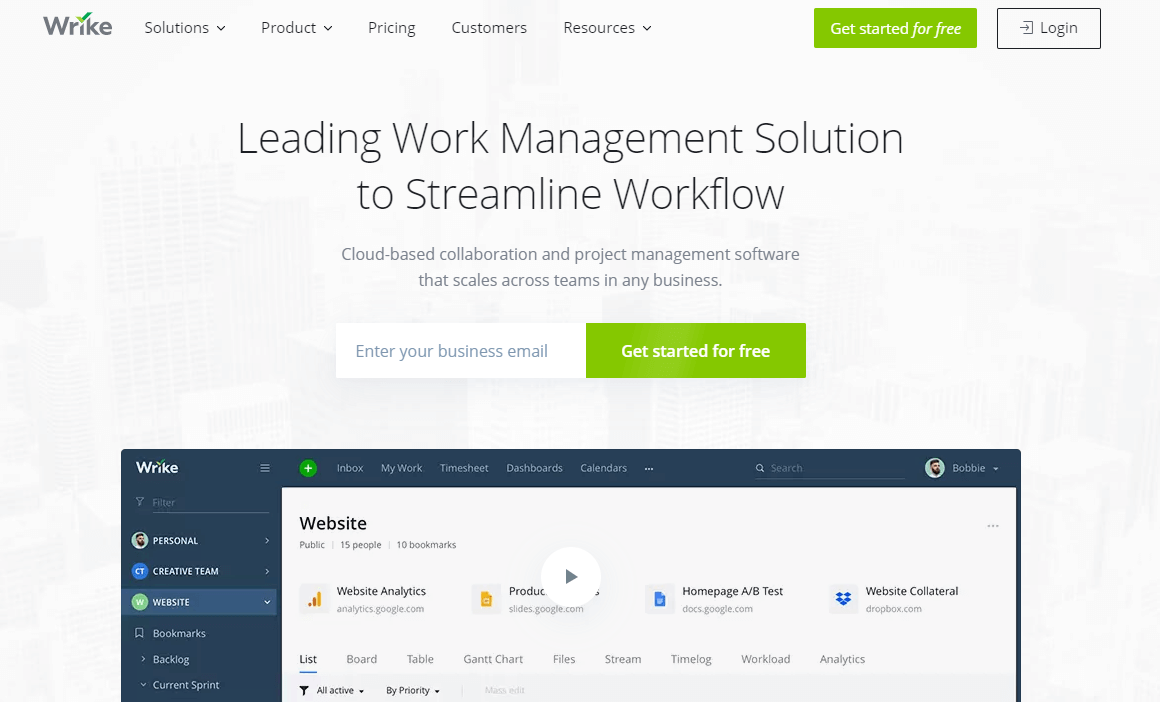 Wrike is an Evernote alternative that is a lot more than just a note-taker and organizer. It is a full-on project management tool that has online workspaces for different people to collaborate.

With Wrike, it is easier for a group of people to talk about documents, images, videos and more. I liked the way that Wrike allows you to use folders for the organization of tasks so that everyone can access the information fast.

There is a bit of a learning curve with Wrike and I found the training to be a bit lacking. It took me a while to figure things out, to be honest. It is a good tool for collaboration though if that’s what you need.

Another good Evernote alternative is Gsuite. Google offers this another collaboration tool with the aim of sharing files easily and you can take notes using Google Docs and also track important tasks using Google Calendar.

If your business needs project document collaboration in real-time then Gsuite is cheaper than using Evernote to do the same thing. There are some limitations that I found with Gsuite though. It is not as good as Evernote if you need to discuss a lot of project ideas with a number of people.

It is not easy to use Gsuite to access the most popular document formats such as Adobe PDF’s and Microsoft Office documents. I did find Gsuite easy to use though with its nice drag and drop interface.

Basecamp is a good Evernote alternative but it is an expensive one. There is a 30-day free trial so you can assess whether it is right for you or not. I did like the fact that collaborators on a project can assign to-do lists to other team members and the group conversation feature is good.

If you need an application for ensuring that you meet deadlines with teams then Basecamp is better than Evernote. I found that the interface was simple and clean and it has a nice drag and drop functionality.

Finding documents with Basecamp was not always easy. For a deadline management tool, it was not always easy to track the progress of tasks with the calendar either. The ability to check tasks on the go with your smartphone is a good feature. 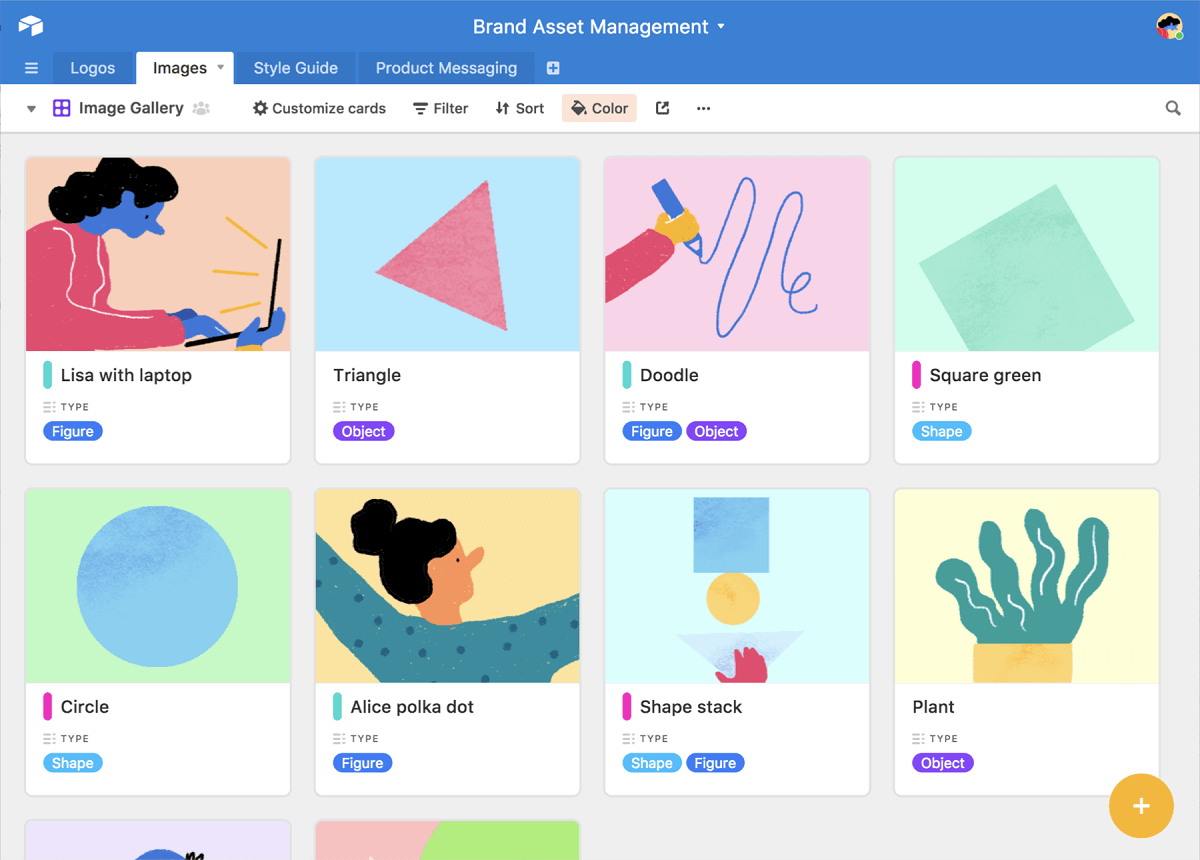 Airtable is a good Evernote alternative in that it allows team members to plan and implement projects with workspaces online. It is pretty easy for team members to make comments on tasks and share files and message each other.

One of the best features of Airtable that I really liked was its project tracking ability through calendars, kanban boards and spreadsheets. You have access to a number of templates with Airtable which I found particularly useful when setting up new projects.

At first, I found the Airtable interface difficult to get the hang of. I think that they could improve this quite a bit to make it easier for new users. It does have good data management functionality though and it is pretty easy to track tasks and other information. 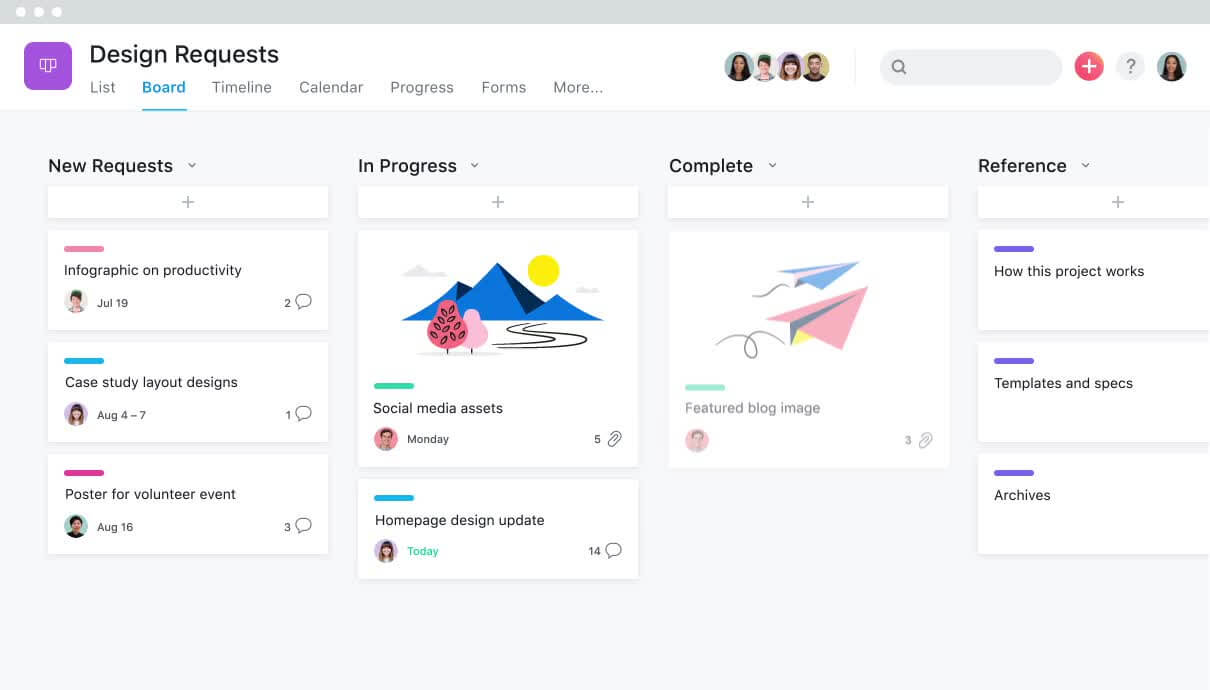 Another good Evernote alternative for project management is Asana. There is easy task visualization with the use of kanban boards and you can share dashboards to assist with communication during projects.

You can map task timelines easily in Asana which makes it ideal for multiple project collaboration. When I first started to use Asana I didn’t really get it. It was not that intuitive and they can certainly improve on this.

I did like the timeline functionality though once I worked out what I should be doing. Another good feature is that Asana integrates with other time tracking solutions and file-sharing tools.

I found that Google Keep was a good free Evernote alternative if you are just looking for basic functionality. There is an Android app and a web-based version as well and I found that taking notes was easy with both.

Google Keep is very quick to use and it has an interface that I’d best describe as “minimal”. When I want to note something I usually want to do it fast and this is no problem. You can’t format text with Google Keep and I do worry about Google having access to my notes.

As I built up a lot of notes on Google Keep I found it a challenge to organize everything. Yes, you can add labels to your notes but it is not possible to group a set of notes together for a specific project. 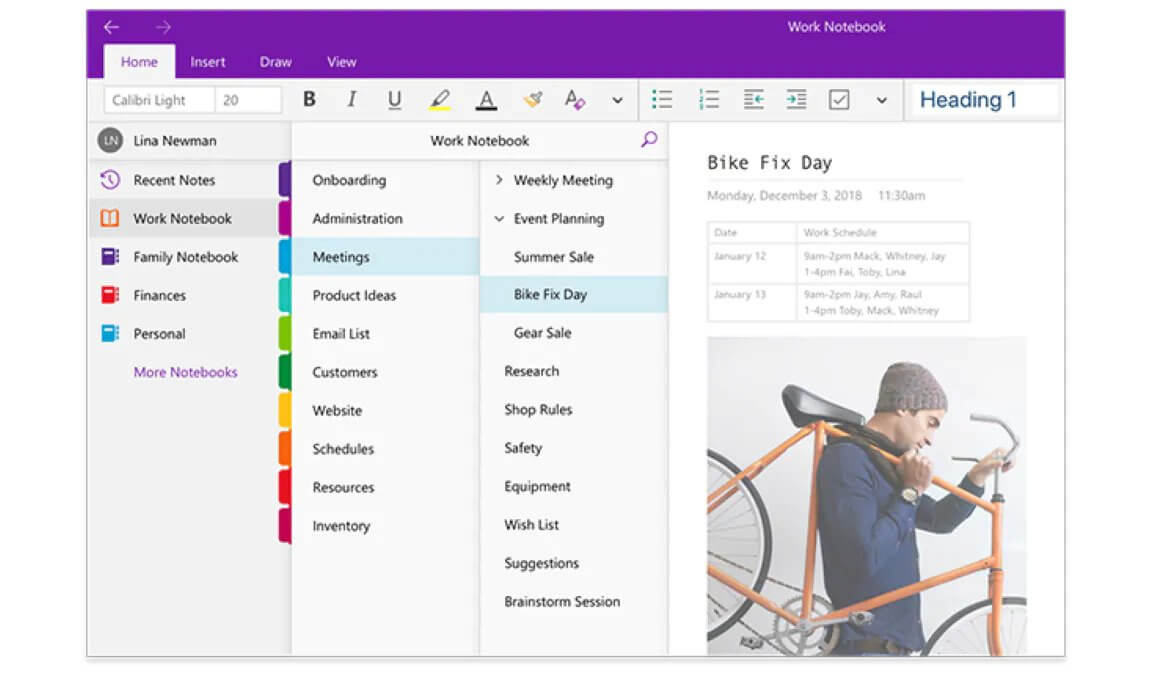 Another fairly basic and free Evernote alternative is Microsoft’s OneNote. You can use it on Windows and Mac computers as well as iOS and Android mobile devices. The OneNote interface is like a whiteboard and you can freely arrange text like you would on paper.

I found it easy to share my notes with others too. You can enter their email address or share a unique URL with others. You can choose whether other people can edit your notes or read them only.

Organizing your notes is simple with OneNote. I found it straight forward to organize my notes using options such as pages and sections. On the downside, I did find searching for specific notes quite difficult. 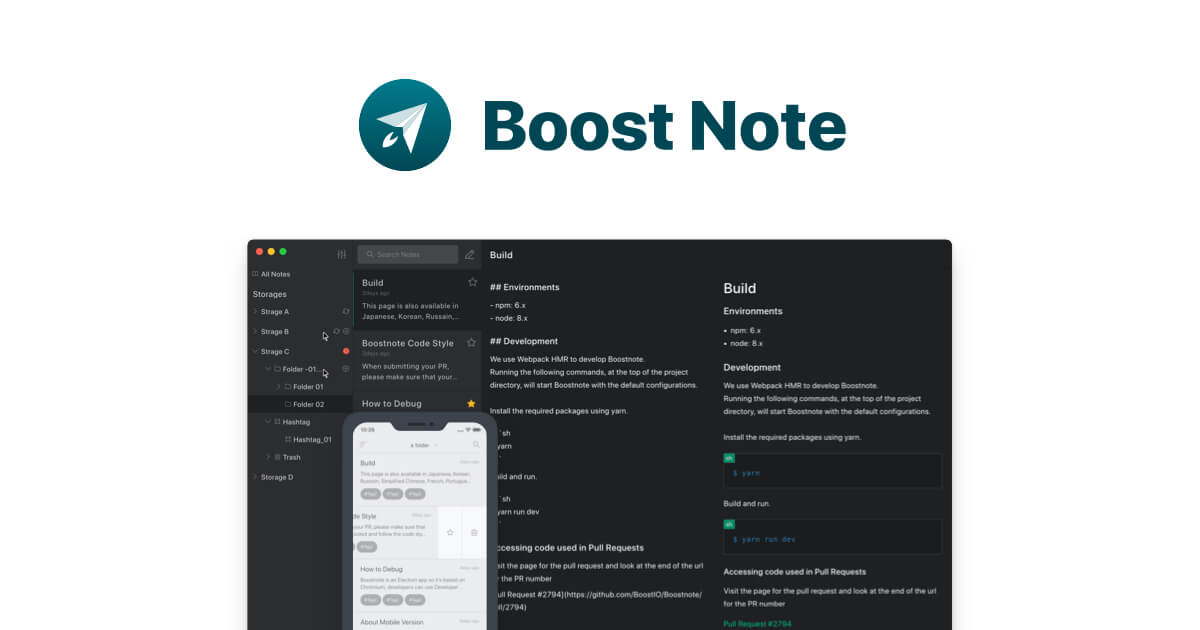 Bootsnote is an open-source Evernote alternative. You can use it with a Mac, Windows or Linux based computer. You don’t have to be online to take notes with Bootsnote as you can do this offline and then later sync up online.

I liked the fact that there are many different themes available with Bootsnote. For syncing with Bootsnote you have to use a third-party service such as DropBox and this can get expensive if you take a lot of notes.

The first time that I attempted to sync Bootsnote I actually lost data! This doesn’t happen every time but is certainly a concern. Bootsnote is popular with the coding community as it allows the making of programming notes and you can add snippets of code.

If you really want to get fancy with your note-taking then NoteLedge is a good Evernote alternative. You can use NoteLedge on your Mac or Windows 8 computer or on your iOS, Android or Windows Phone mobile device.

When I first used NoteLedge it impressed me that there are 6 different brushes available for note-taking. Backing up my notes was easy too as I could use any of the major cloud services such as Google Drive and DropBox.

If you want to add info from the Internet to your notes then you can do this easily via the inbuilt browser. You can select text and copy images and also embed audio and video. I couldn’t actually find much to complain about with NoteLedge for enhanced note-taking. 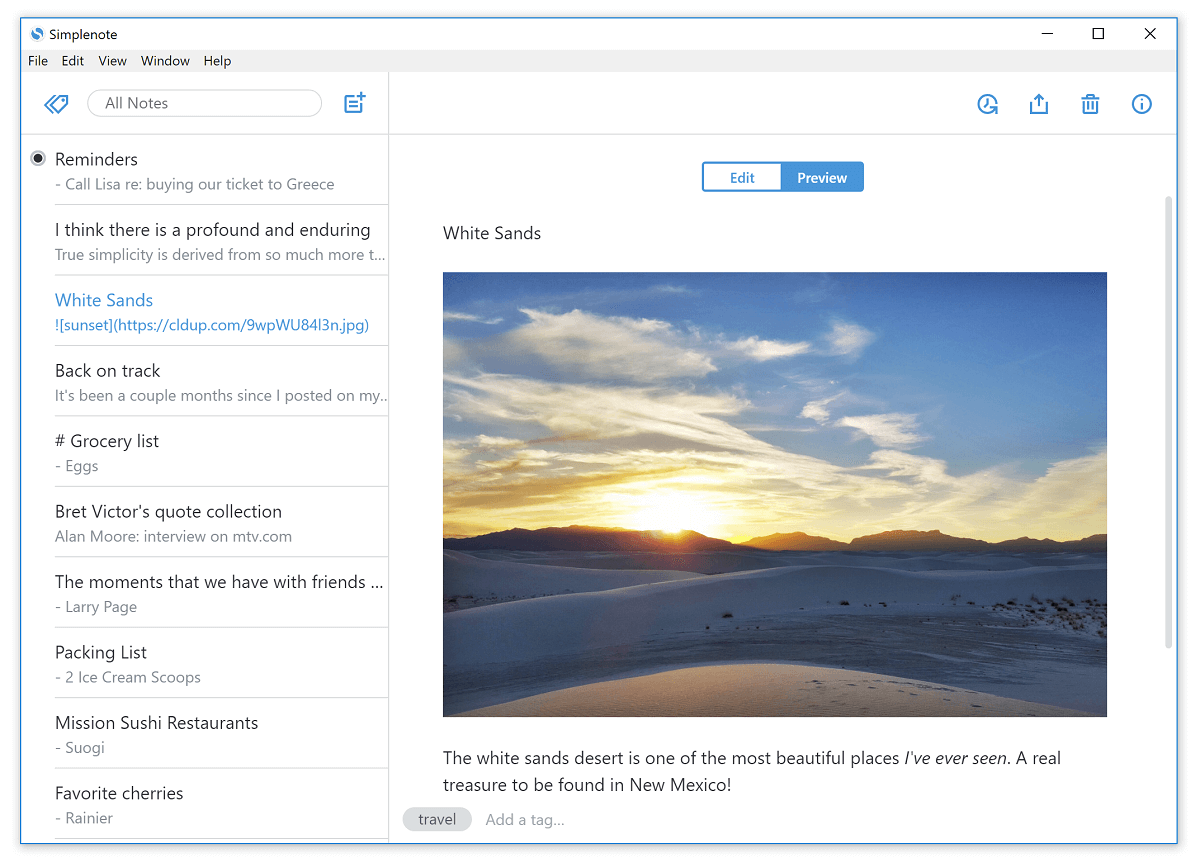 My final Evernote alternative is Simplenote. This is a multi-platform note-taking app that works on Windows, Mac, Linux, Android and iOS devices. One of the things that I really liked about Simplenote compared to Evernote was the simplicity of the interface.

I found it very fast and easy to make notes using Simplenote. You have the ability to work in offline mode and then you can sync online later. I also appreciated the fact that Simplenote saved my note edits in the order made as this made things a lot easier going back.

It is a shame that there is no 32-bit version for Windows. You can share notes with others but if they make a change you don’t get a notification of this. Simplenote creates a URL to share with others which is OK but you can’t share your notes directly to social media.

The Verdict on Evernote Alternatives

I don’t know what you want to use Evernote for so I have provided you with some of the most powerful project management type solutions which all cost money as well as basic note-takers. So the first decision you need to make is how far you want to take your note-taking.

For the major collaboration and project style Evernote alternatives I particularly liked AirTable and Asana. Although both of these take a bit of getting used to they do have very good features. The pricing of both of them is OK too.

Of the simple note-takers, I loved the NoteLedge app because it has a lot of great features. If you want a free note application then Microsoft OneNote is probably the best as you can organize your notes easily. If you like simplicity then take a look at Simplenote.

Do you have an Android-powered mobile device? Have you considered using an office app so that you can create and edit documents, spreadsheets, and presentations while you are on the go? There are actually a [read more…]

10 Best Primewire Alternatives To Consider in 2022

Primeware has been around for a while and many millions use it to watch streaming movies online. Although it doesn’t store movies on its servers and uses associations with third parties to provide the streaming [read more…]