If you are a Windows user and need an SSH client then the first one you are likely to think about is Putty. Over the years Putty has become the SSH client application of choice among the IT engineering community and it’s by far the most popular choice for Windows users.

Solar Putty is a popular Putty alternative that you don’t have to install on your Windows computer to use. I found this SSH client to be lightweight and it was really good for making connections to a number of different servers or other devices all at the same time. Solar Putty has a simple interface and is easy to use.

I really liked the use of tabs in the user interface so that I could run a number of sessions at once. It was easy to reconnect to a server automatically if the connection failed or the server disconnected me. I was able to use Solar Putty on a USB stick rather than installing it which was useful.

I liked Solar Putty a lot. It’s really simple and straight forward to use and you also get a sample connection link to create your own login sessions. You can change settings for sessions, tags, credentials, logs and scripts easily too. 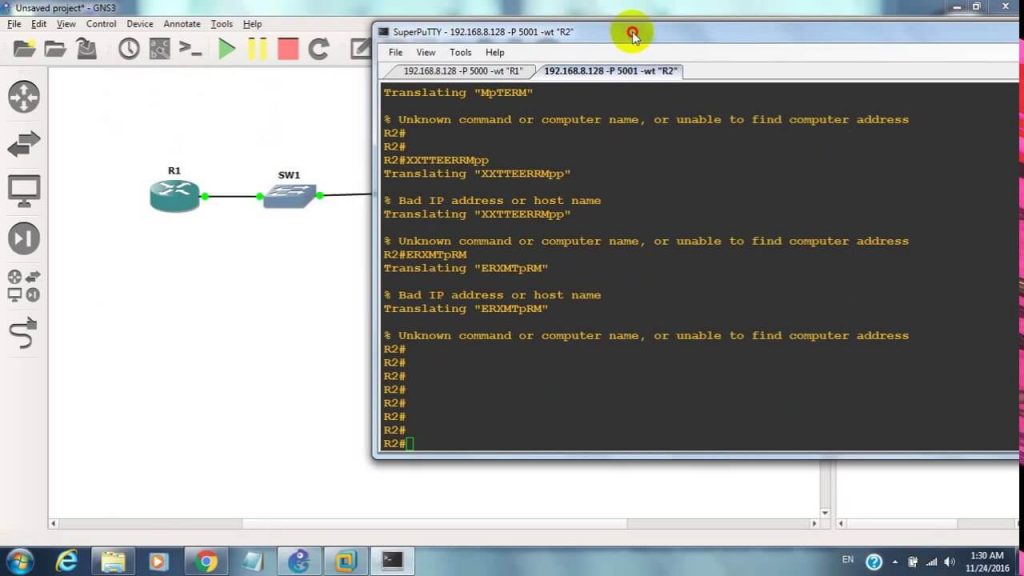 Super Putty is another fine Putty alternative. In fact, the development of Super Putty was to improve Putty so that users could have a tabbed SSH client. I always like tabbed apps and I could successfully set up several connections and monitor them through Super Putty which is excellent.

I found the interface of Super Putty very responsive and the app provides support for numerous connections and protocols such as SSH, Kitty and Telnet. I also liked the fact that I could customize Super Putty and there were a lot of customization settings to play with. I was also able to configure Super Putty for remote printing and line discipline.

There are a number of keyboard shortcuts and I was able to set up alarms and alerts. You can also run sessions for importing and exporting and connecting to many different servers and devices is easy. Super Putty is very robust and everything works well. 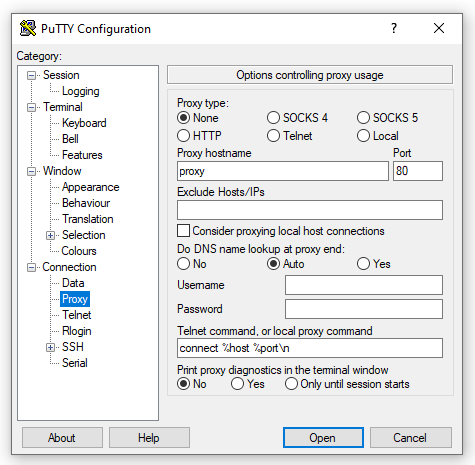 Another good Putty alternative is Putty Tray. Putty Tray used Putty as its foundation and they have added some extra features and functionality. There is no requirement for you to install Putty Tray. I was able to add it to a USB stick and then use it from there without a problem.

All I had to do was to find the executable file for Putty Tray on my USB stick and it launched this versatile SSH client. This is very convenient if you use a number of different Windows computers as you can use Putty Tray from a pen drive or USB stick. 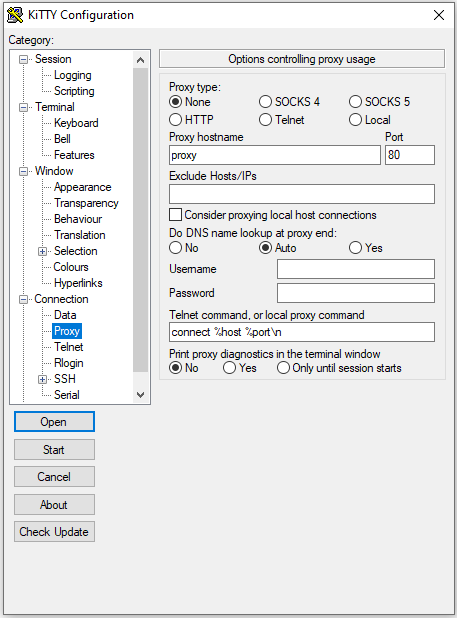 If you are looking for a split version of Putty then Kitty is a very good Putty alternative. There are a number of add-ons with Kitty and I found it much better than the original Putty SSH client. You will find all of the original Putty features in Kitty as well.

Kitty is very lightweight and I was able to use Telnet for remote computer connections. I found it easy to connect to another computer by just using its IP address. I set up a number of different connections and Kitty saved the details so that I could connect at any time. Secure connections using Kitty are through HTTP proxy server or SOCKS.

The Kitty user interface is friendly and I was easily able to access the different variables that I needed for a current session, terminal windows and the connection. There were a few customization options with Kitty and you can use this SSH client in the background to start sessions fast.

5. MobaXTerm – Free version and upgrade for $69 per user 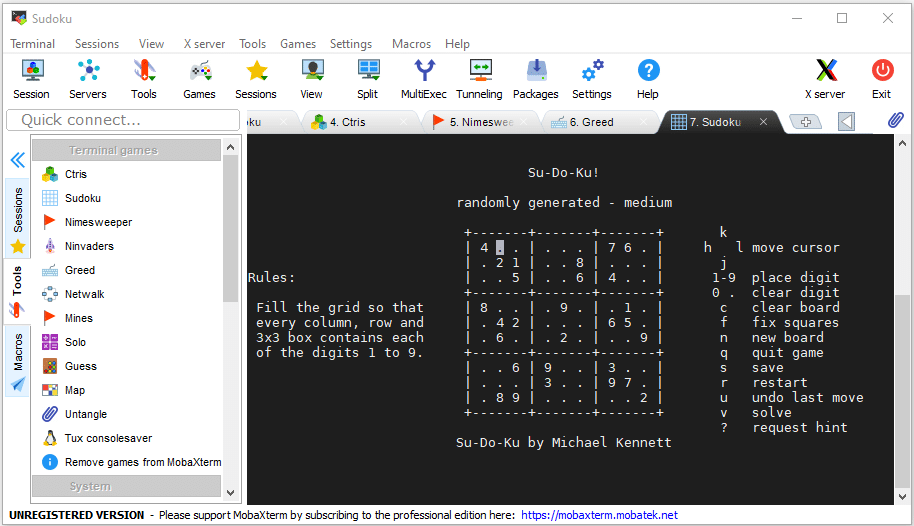 MobaXTerm is another serious Putty alternative. It is a fully-featured Windows SSH client designed to improve your productivity. You get a number of network tools with MobaXTerm such as X11 server. I was able to run MobaXTerm from my USB stick which was helpful for portability.

I found that while I was using an SSH client link in MobaXTerm to connect to a remote machine an SFTP browser automatically appears to make the editing of remote files easier. Using X server I was able to display remote applications on my desktop as well.

The free version of MobaXTerm was pretty good but there are limitations such as you can only establish 2 SSH tunnels, you can only run up to 12 sessions concurrently, a tie limit of 6 minutes for TFTP, NFS and Cron and the use of only 4 macros. If you need more than this you’ll need to purchase the upgrade.

6. Xshell 6 – Free for personal use and starts from $99 for business use 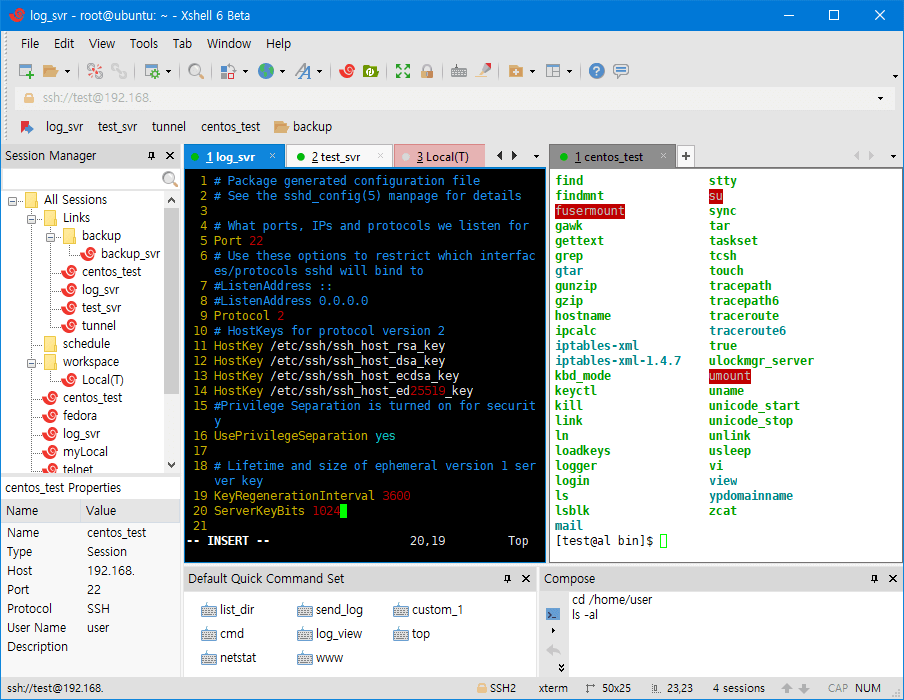 A lot of IT professionals like Xshell and it is a good Putty alternative. Xshell supports a number of protocols such as SSH1 and SSH2, Telnet, Rlogin, SFTP and Serial. I’d not used Xshell before and I was really impressed with the number of features it has. Xshell is a business SSH client but I was able to use it at home.

There are some really nice features such as port forwarding, a tabbed interface, custom key mapping, highlight sets, scripting in Python/VB/JS and more. When you have a session running you have fast access to all of the tools that you need to manage it.

I liked that Xshell could support horizontal scrolling and the app really provided me with a clear view to monitoring what was happening on remote servers I connected to. You can add additional security to the file encryption of your sessions by creating a master password. 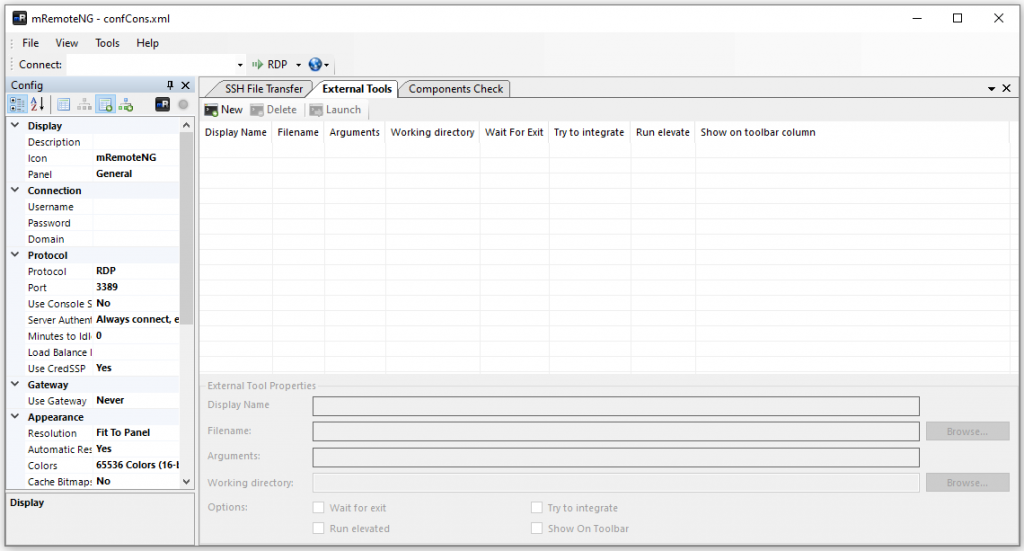 mRemoteNG replaces the original mRemote with the ability to run tabs with different remote connections and it’s a viable Putty alternative. You have access to several different protocols with mRemoteNG and the developers of this SSH client add new features often and fix bugs quickly.

The interface of mRemoteNG was pretty simple and straight forward to use and I was able to track the number of different sessions in tabs easily. mRemoteNG supports ICA, VNC and RDP.

I liked that mRemoteNG provides not just SSH but raw socket connections, Telnet and HTTP/HTTPS. There is also an Rlogin option. Overall I was impressed with mRemote NG as an open-source SSH client and found it simple and effective to use. 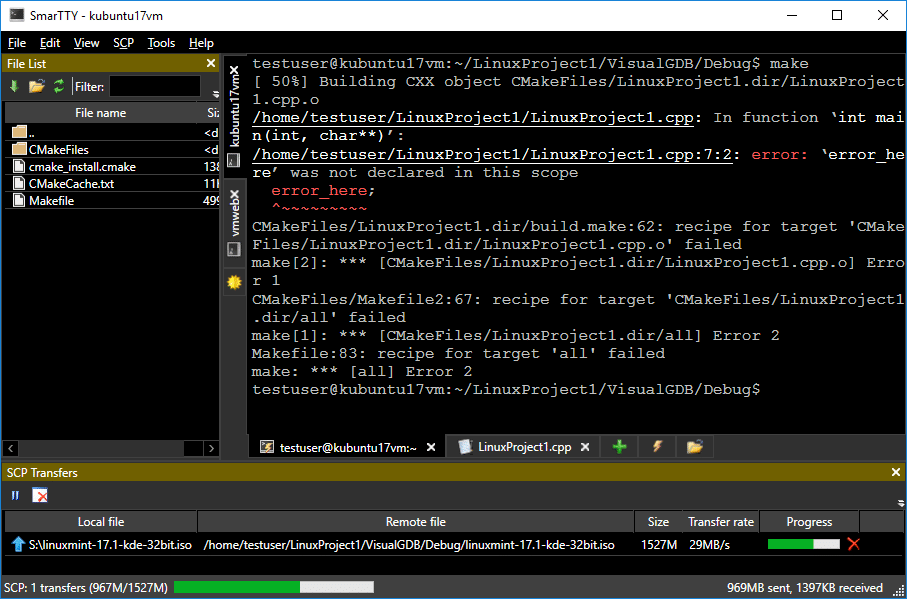 I found SmarTTY to be a really good Putty alternative. It has a multi-tabbed feature like a lot of the others and I really appreciated the SCP support so that I could copy files and folders and edit files. The new user interface for SmarTTY is very attractive and high resolution. The smart terminal mode is also a new feature to improve productivity.

When I opened a smart tab SmarTTY automatically detected if I was using SSH commands or using command line editing. I was also impressed with the popups containing suggestions under smart tabs and they helped with command names and files.

I was able to save a lot of time with SmarTTY because it converts Linux paths into simple clickable links. You can also see a list of directories and files as it is able to monitor the current directory in each of the tabs. There is also a portable version of SmarTTY which runs on Windows 7 or higher. 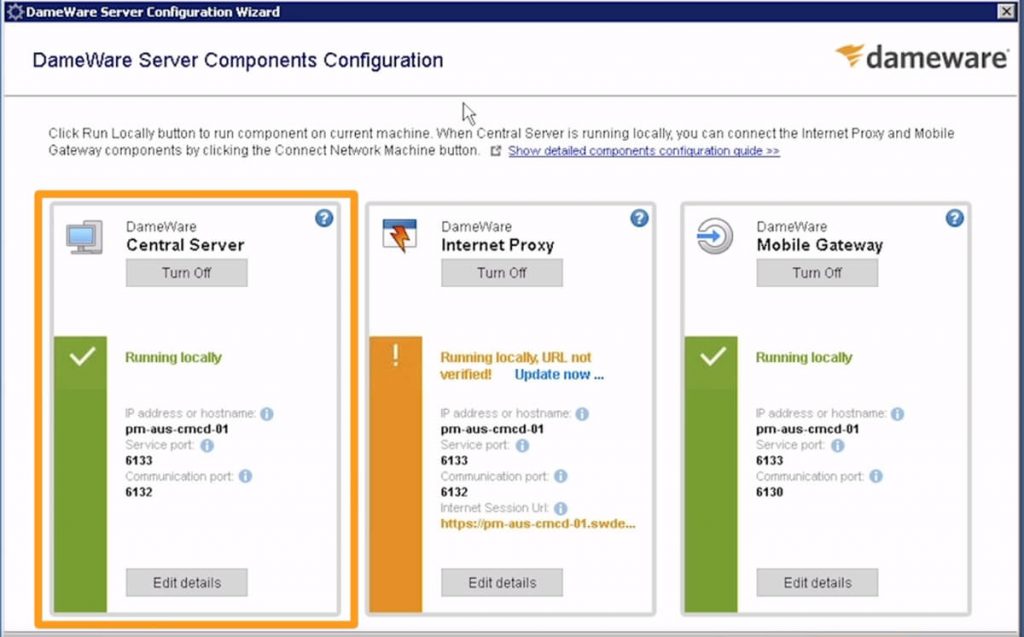 I would classify the Dameware SSH Client as “high end” and it is an expensive Putty alternative. It is a terminal emulator where you can run numerous SSH and Telnet sessions from one user-friendly interface. Dameware SSH Client is a high-security SSH client and is fairly popular among network professionals.

I wasn’t able to verify the high level of security with connections but I’ve no doubt that this exists. You can use multi-factor authentication for your remote sessions. There is also a built-in help desk and it supports active directory management.

I liked the tab facility and you can save your most frequent sessions in Windows file format. This was handy for logging in later. It supports different protocols such as SSH1 and SSH2 and Telnet and there are many other features too. Is it worth $295+ per user? Well, that’s hard to say and I would have to think very carefully before I committed to this SSH client. 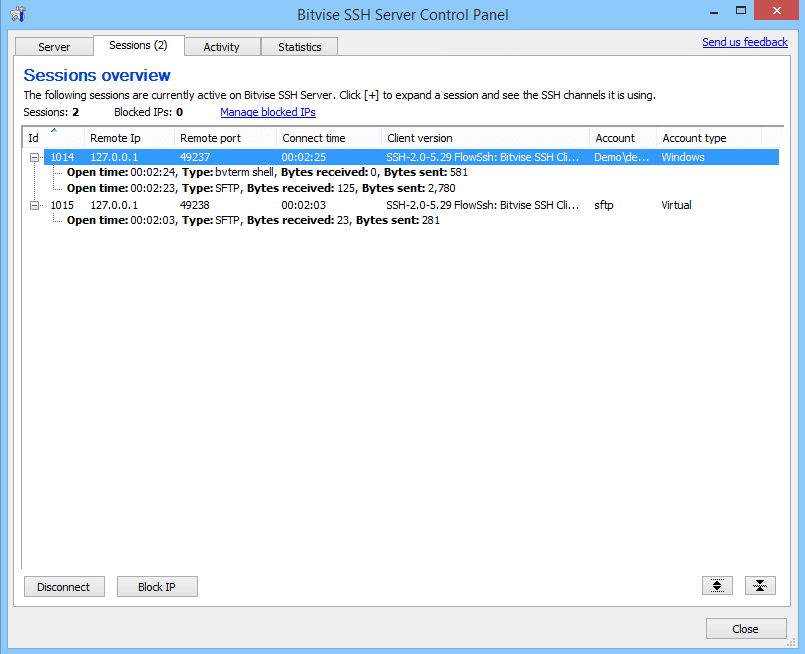 I liked this additional security as it provides additional protection for your passwords and other credentials. Hackers will not be able to view any files that transfer when you use Bitvise SSH Client in SSH mode.

If you need to administer Windows servers remotely then Bitvise is a good option. You can transfer files with a high level of security using SCP and SFTP. The Bitvise SSH Client appeals to professional users who require remote access to their work systems on a secure basis.

So which Putty alternative?

In my Putty alternative list above there are simple SSH client solutions and more sophisticated ones. None of these applications disappointed me, in fact, they all did a good job in establishing and managing remote connections.

Of the free options, I really liked SmarTTY the best. It has so many features for a free application and it works incredibly well. Kitty is a good free alternative too. If security is a major concern for you then you need to take a serious look at either the Dameware SSH Client or the Bitvise SSH Client but these options are expensive and for professionals only.

10 Best Primewire Alternatives To Consider in 2022

Primeware has been around for a while and many millions use it to watch streaming movies online. Although it doesn’t store movies on its servers and uses associations with third parties to provide the streaming [read more…]

Do you have an Android-powered mobile device? Have you considered using an office app so that you can create and edit documents, spreadsheets, and presentations while you are on the go? There are actually a [read more…]