Computers often get too hot because of the loads placed on the processor. This is especially true with laptops and the ability to control the speed of the fan in your computer will help to reduce the amount of overheating that is occurring.

For a lot of Windows users, Speedfan is the number one application for controlling fan speed. Speedfan will not just interpret fan speeds but it will measure temperature and voltages as well. You can use Speedfan to change the speed of your computer fan if things start to get hot inside.

It is possible to use Speedfan to speed up your fan or slow it down. Sometimes a computer may not be running too hot but the fan is making too much noise as it whirrs around at speed. In most cases, you will want to use the application to speed up your fan because your laptop is in danger of overheating.

Although Speedfan is very popular among Windows computer users it is not the only game in town. The interface with Speedfan is not the easiest to understand and use and you will be delighted to know that there are some good Speedfan alternatives available.

So I set myself the task of checking out the other applications available for controlling fan speed. Some of the programs offer other features as well such as temperature monitoring your hard drive as well as the CPU. So I bring you the results of my tests with 7 Speedfan alternatives that you can consider. 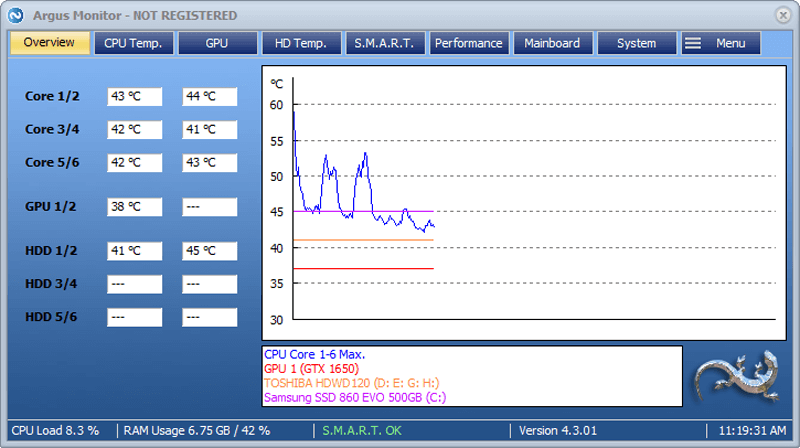 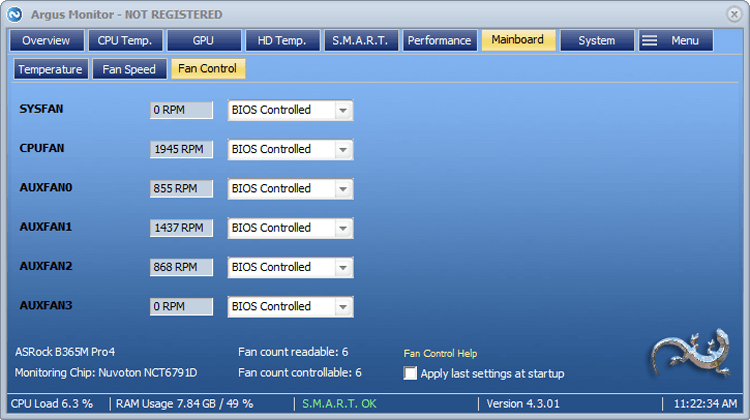 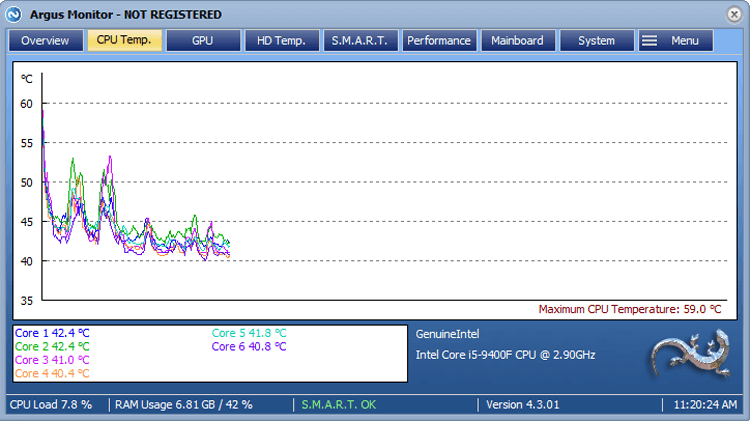 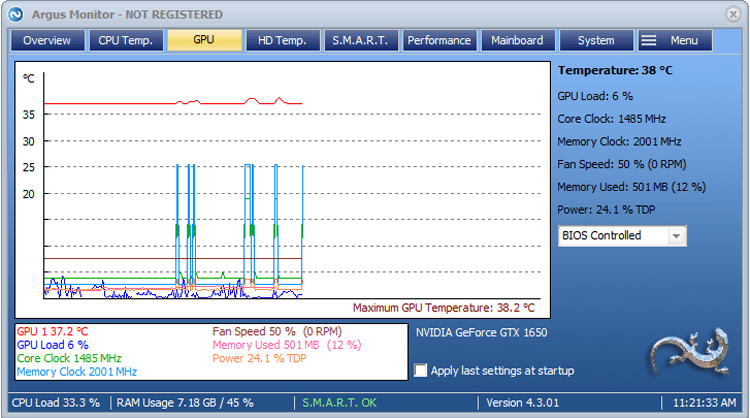 Argus Monitor is a good Speedfan alternative. It is a fully-featured monitoring application that will check almost all of the hardware components that exist in your computer. One of the things I really liked about Argus Monitor was the fact that it provides a graphical representation of the temperatures of your CPU, GPU and hard disks.

With Argus Monitor, it can tell you when a hard drive is close to failure due to its ability to read S.M.A.R.T. temperatures. Of course, you can control the speeds of the fans that exist in your computer as well.

You can use Argus Monitor on a free trial basis for 30 days and then you will need to upgrade to either the basic or professional version. I liked the interface of Argus Monitor a lot more than Speedfan, to be honest, and it seems to do a similar job if not more. 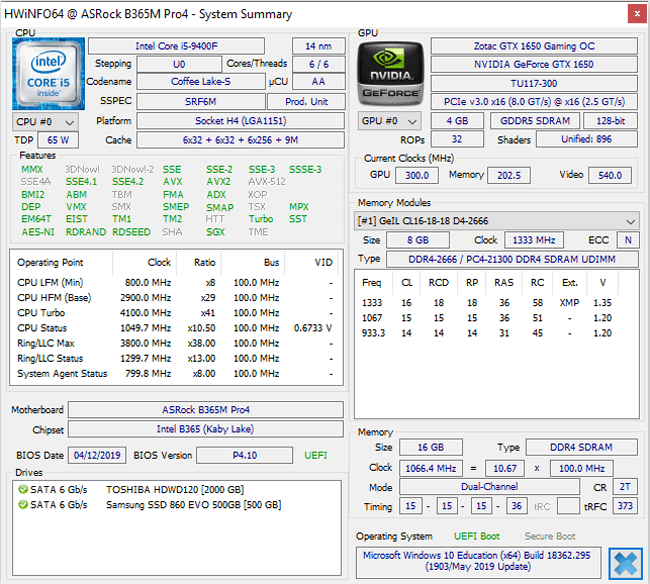 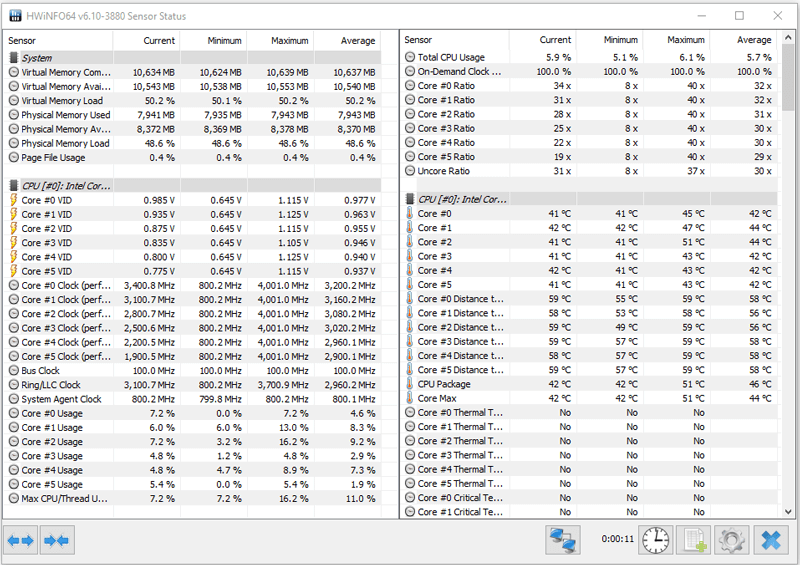 I know that a lot of you will be wondering if there is a free Speedfan alternative and the answer is yes. HWiNFO will work with Windows and even DOS operating systems (does anyone really use DOS anymore?). The application provides you with a quick overview of your computer components and delivers a real-time system status.

You can control the fan speed with HWiNFO and it offers a lot more than that. It can provide you with alerts to tell you that something is not right with your system and is about to fail. The interface is easy to use and understand and you can customize it how you want it. You can even create error logs in HTML, CSV, text and XML formats.

There are a number of plugins you can download for HWiNFO as well for even more system monitoring. It offers a great deal for a free application and a lot of people make donations to the developers because they love it so much. 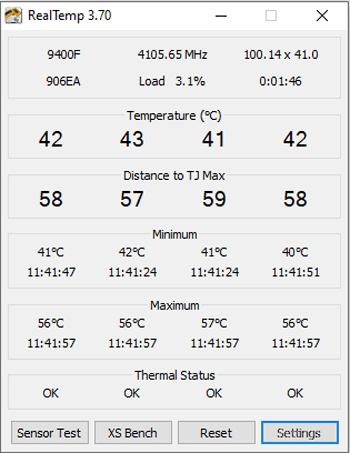 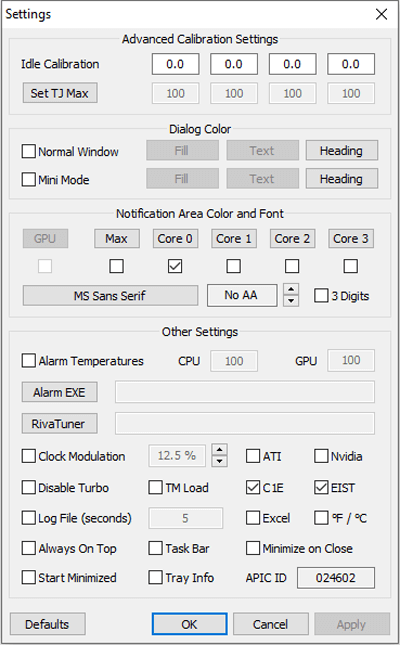 You can consider Real Temp as a Speedfan alternative but it does work a bit differently. The main function of Real Temp is to monitor the temperature of your CPU(s) and GPU. Unfortunately, it only works with Intel processors and they have to be better than Pentium 4. So we are talking single-core, dual-core, quad-core and i7 processors here.

Real Temp will also work with popular GPU’s from AMD, ATI and Nvidia as well. The application gathers temperature information and displays this in the application. You can see the minimum and maximum CPU temperatures and you can keep a log of these.

There is an alarm facility with Real Temp which will tell you if your CPU or GPU is getting too hot and you even have the option to shut down your computer automatically if there is an alarm. You can run Real Temp on Windows 200 upwards to Windows 10. The interface is nice and simple. 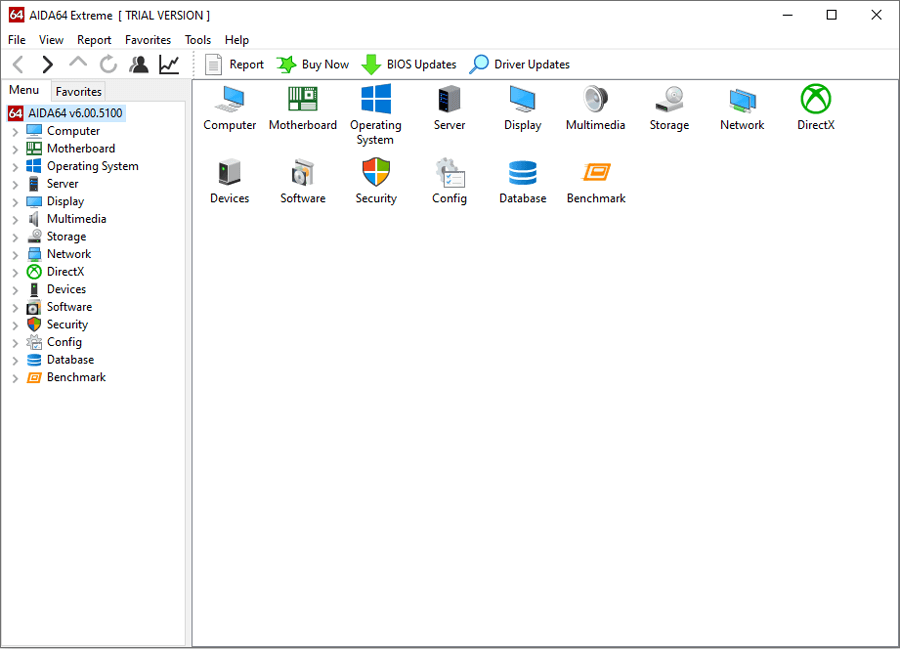 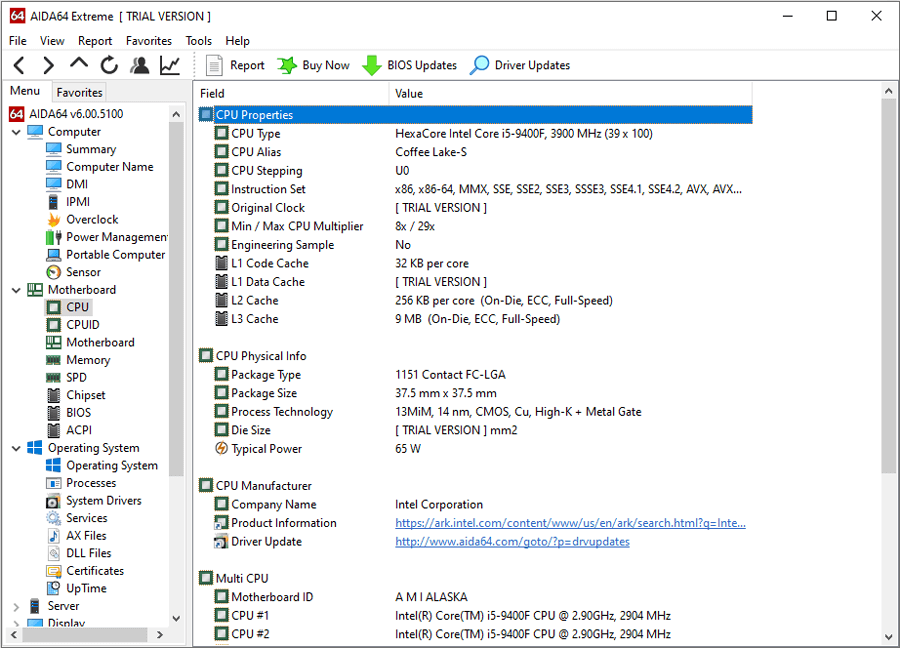 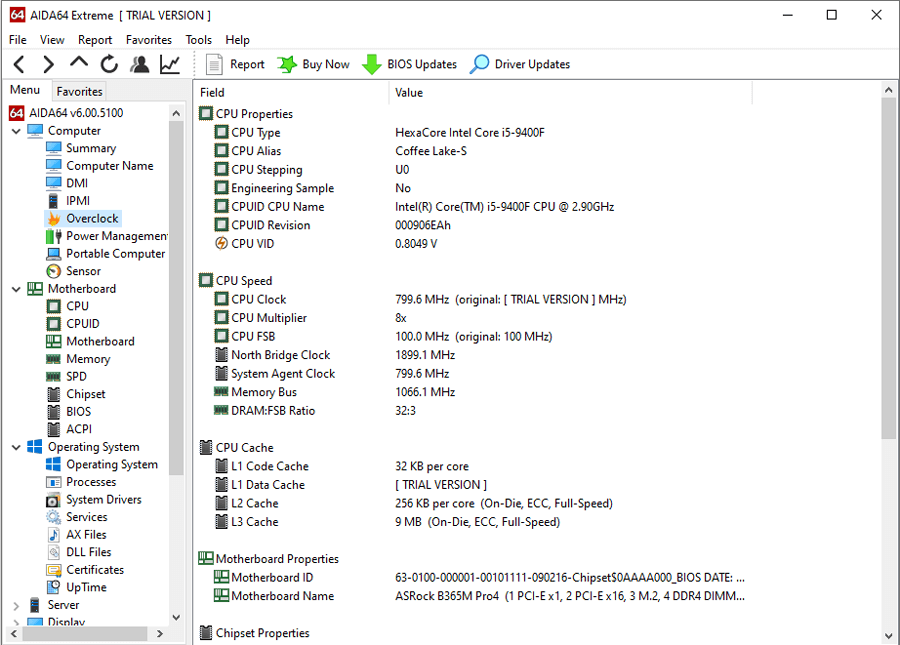 AIDA64 Extreme will not only diagnose your system components but you can also use it to benchmark your hardware too which makes it a good Speedfan alternative. There is a lot of support for different sensor devices in AIDA64 Extreme and you can not only monitor temperatures but also fan speeds, voltages and power consumption.

You can choose how you want to display the information produced by AIDA64 Extreme. You can have an OSD panel arrangement, a sidebar gadget or a system tray arrangement as well as others.

With AIDA64 Extreme you can check the actual performance of hardware components as well such as hard drives, memory and your CPU. The application also lets you run stress tests to ensure that your system is stable. You can run AIDA64 Extreme with all versions of Windows from 95 onwards as well as Windows Server from NT4/200. 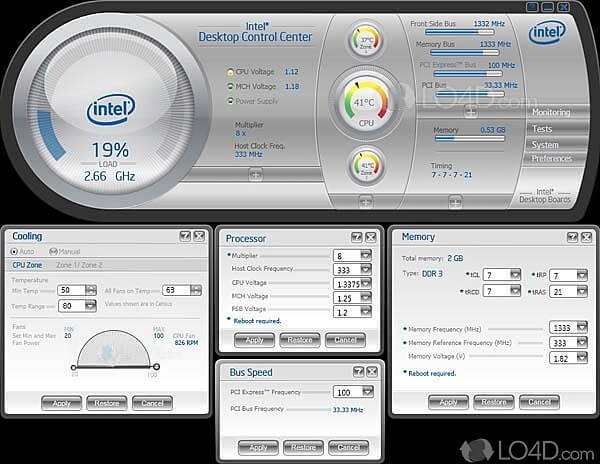 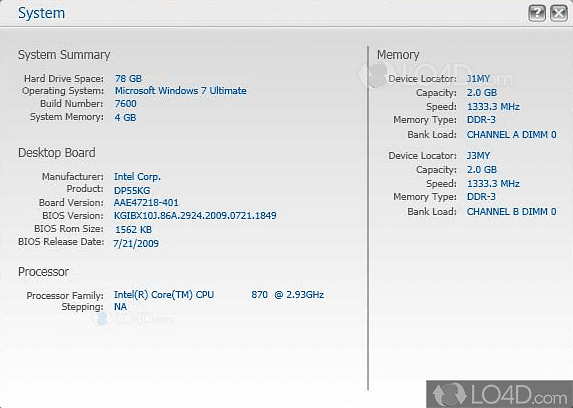 You can tune up your system using the Intel Desktop Control Center by overclocking the memory, bus and CPU speeds. It is also possible to control fan speeds, temperatures and voltages using this application. There are benchmarks that you can use to analyze the performance of your motherboard as well.

You will usually find the Intel Desktop Control Center application on the driver’s disk that accompanied your motherboard. If it is not there or you can’t find it then you can download it for free here.

Core Temp is another good Speedfan alternative. It is similar in functionality to Real Temp but it has the added flexibility of being able to monitor a much wider range of CPUs including those from AMD and VIA. Core Temp does not use traditional onboard thermal sensors but monitors the Digital Thermal Sensor (DTS) embedded in CPU’s.

Core Temp works with Windows XP through to Windows 10 and 2003 Server through to 2016 Server. Your computer will need an Intel, VIA x86 or AMD processor. There are a number of plugins available for you to customize the application such as a graphical view of each CPU temperature and a sidebar gadget.

It is free to use Core temp and the interface is a lot simpler than Speedfan. There is even an Android and Windows phone app which you can use to monitor your systems remotely. This is a great Speedfan alternative at a great price. I really liked it.

HWMonitor is the last of my Speedfan alternatives and the good news is that it is another free application. It is a very popular hardware utility that works with all versions of Windows. HWMonitor is a really lightweight application and when I used it I noticed a very little impact on my system resources.

There are lots of updates to HWMonitor as it is important that it supports the very latest hardware available. The interface is simple and easy but you get a lot of information such as clock speeds, temperatures and voltages. Within the app, you will see the minimum and maximum values and supporting information to help you understand everything.

For a free application, HWMonitor does an awful lot. I found it very easy to install and use and you just can’t ask for anymore. There is a Pro version that I didn’t test and this costs around $25 – $40 depending upon the number of remote connections that you want. In all honesty, the free version will be sufficient for most people.

I hope that I have convinced you that there are Speedfan alternatives available and some of these are free. Of the two paid applications I would put AIDA64 Extreme ahead of Argus Monitor because the former offers you the ability to run stress tests on your computer. If this is not of interest to you then the cheaper Argus Monitor is a good choice.

I was amazed at the number of free Speedfan alternatives that are available. You just can’t lose here and may as well try them all out to see which one you like the best. I thought that Core Temp and HWMonitor were excellent applications. HWiNFO is good as well and will do everything that most people want.

Do you use the same password for all of the websites that you use? It’s understandable if you do this because remembering a lot of complex passwords can be a real headache. But using the [read more…]

I‘ve used Notepad++ for a long time and it’s a really great tool. It can do so much more than the standard version of Notepad that comes with your Windows operating system. I found it [read more…]