Technize is supported by its audience. When you buy through links on our site, we may earn an affiliate commission. Learn more.

I‘ve used Notepad++ for a long time and it’s a really great tool. It can do so much more than the standard version of Notepad that comes with your Windows operating system. I found it very useful when I was learning HTML and PHP code for web application and development. And I’m not the only one – many coders swear by the application.

Notepad++ now comes with Windows 10 as standard and one of the best things about it is that it will highlight code syntax. You can use Notepad++ for code or syntax folding as well. The application has a very useful search and replaces feature and there is an auto-complete facility where is complete words and functions and also provide function parameter hints.

Notepad++ has a tab facility which is great for opening up several different files. There is also a multi-view facility as well as zooming in and out. You can create macros in Notepad++ and the printing is WYSIWYG. It offers so much for free but there are alternatives available. 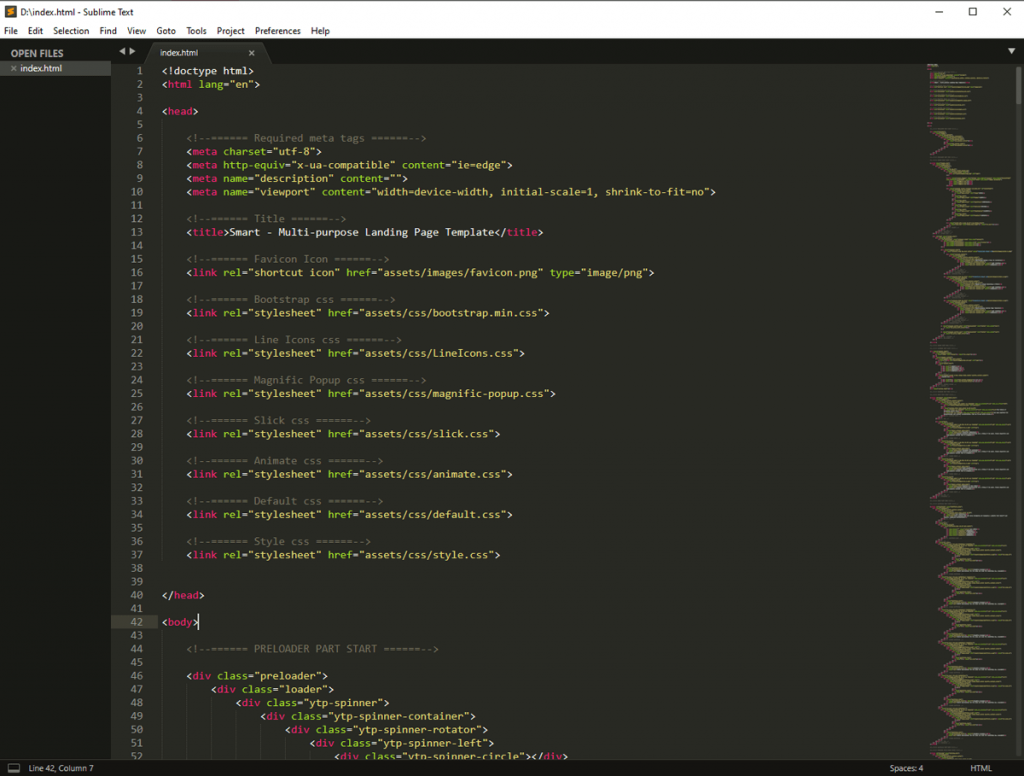 Sublime Text is one of the very best Notepadd++ alternatives available. It really does have a great number of features and you can use plugins and add ons if you want support for more programming languages and mote functionality. I loved the search and go feature in Sublime Text and I also liked the number of keyboard shortcuts I could use for greater efficiency.

Like Notepad++ you get a tabbed interface with Sublime Text. I liked the fact that you can make changes to multiple rows at the same time and I was able to set up my own personalized shortcuts which were great. You can use Sublime Text on Mac and Linux computers as well as Windows which is more than you can do with Notepad++.

I only tested the free version which you can basically download and use forever. If you are a serious coder then you will want to get the full version. You only have to purchase one license for Sublime Text and then you can use it on as many computers as you want. It is a very powerful program. 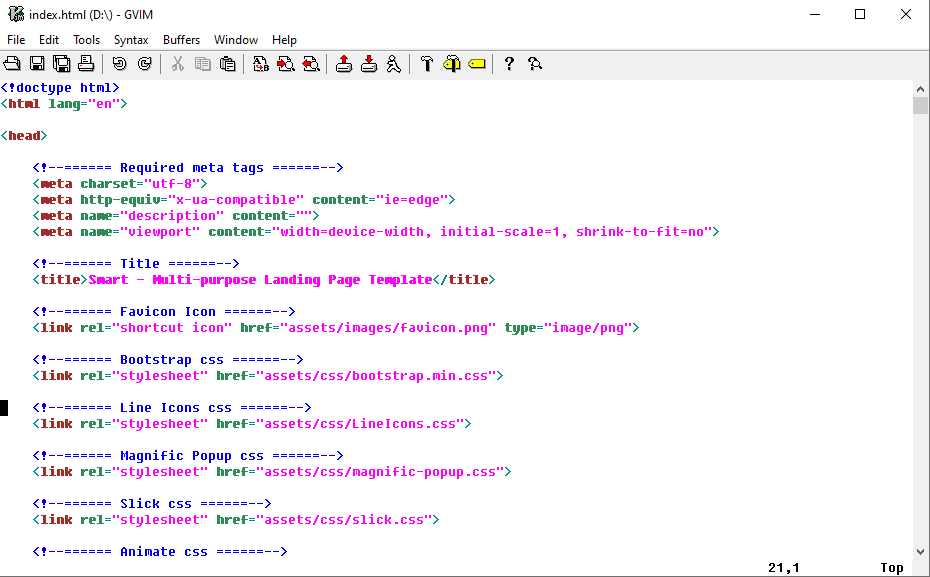 Vim is a totally free Notepad++ alternative. It is available to use on Windows, Mac and Linux computers and it is very powerful. I was able to customize Vim to get it to look and function just how I want it. There is really good help support with Vim so if you are new to programming it will get you through most issues.

In fact, I’d go as far as to say that you don’t need programming skills to benefit from using Vim. You will need to spend a bit of time configuring it to your liking but it’s so flexible that you have a lot of options here. The amount of keyboard shortcuts you can use with Vim is certainly impressive.

There are a lot of user scripts available for download which you can apply to really streamline how you work as well as help you to get the hang of this feature-packed text editor. Vim has support for a lot of programming languages and there is a cool history feature so that you can go back over your actions. Watch this video to learn how to install vim in your window PC. 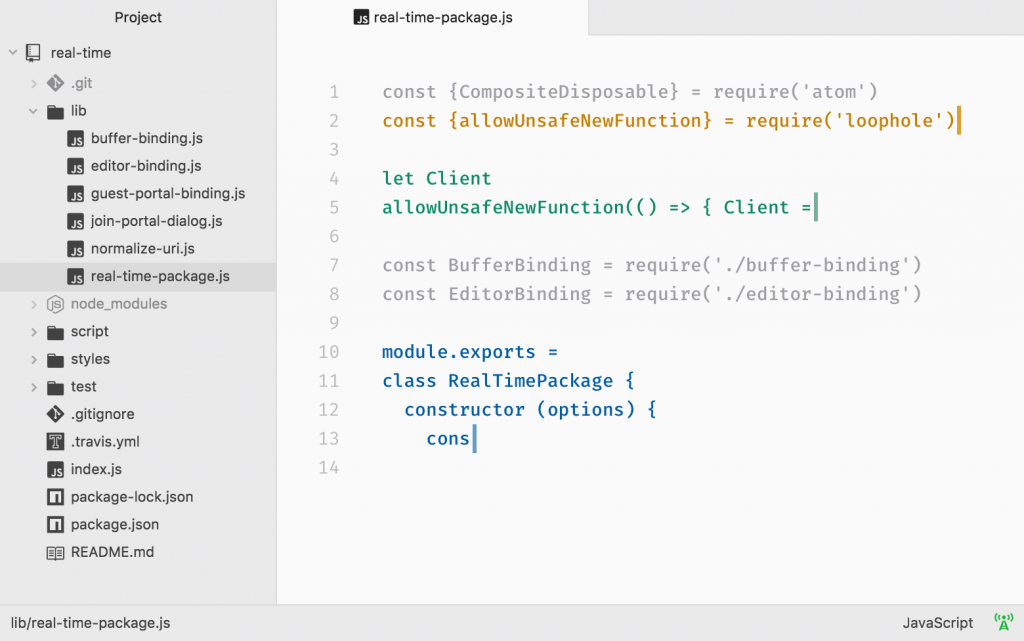 For a while, you could only use this free Notepad++ alternative for the Mac but now there are versions available for Windows and Linux. The developers at GitHub created Atom and they have used their experience of regularly managing code to create this awesome text editor for other programmers.

Atom is a very flexible text editor and I really liked the different customization options that are available. Not only that but there are a lot of plugins available for Atom due to its open API. When you use Atom it’s like using a native application and you get a tabbed layout similar to Notepad++. I also liked the multi-paned layout a lot.

If you know your code then there’s almost no learning curve with Atom. It didn’t take me long to get started with it so it will be very easy for experienced programmers. If you need help then there’s a ton of supporting documentation. File browsing is easy with Atom and you can customize it so you just have the modules you need. 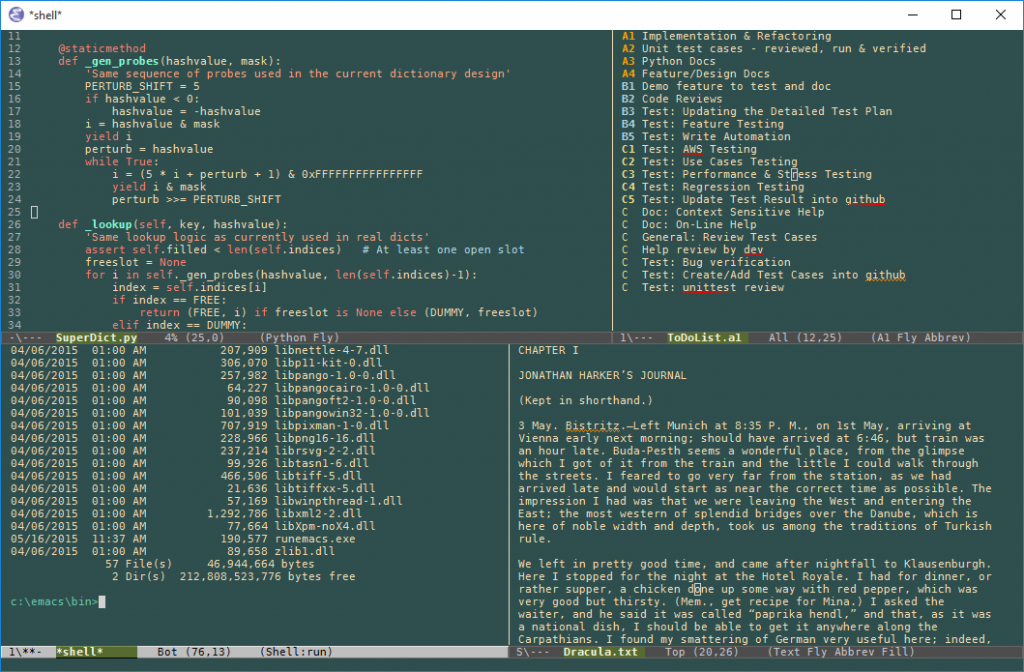 Emacs has been around in its various forms since 1976 and is another very worthy Notepad++ alternative. When I first started using Emacs I have to admit that I didn’t find it the easiest to use. But once I got used to it I realized just how powerful Emacs is for the programming community.

You can use almost any type of text with Emacs from the simplest of documents to the most complex code. I liked the fact that you can use different startup scripts to customize the interface so that it matches up with how you want it to perform. There are a large number of keyboard shortcuts and you can record macros with Emacs too.

If you aren’t a programmer then you can use a growing number of third-party modules to create different uses for Emacs including word processing, project planning, news reading and calendaring. You can install and use Emacs on a Mac, Linux or Windows computer. 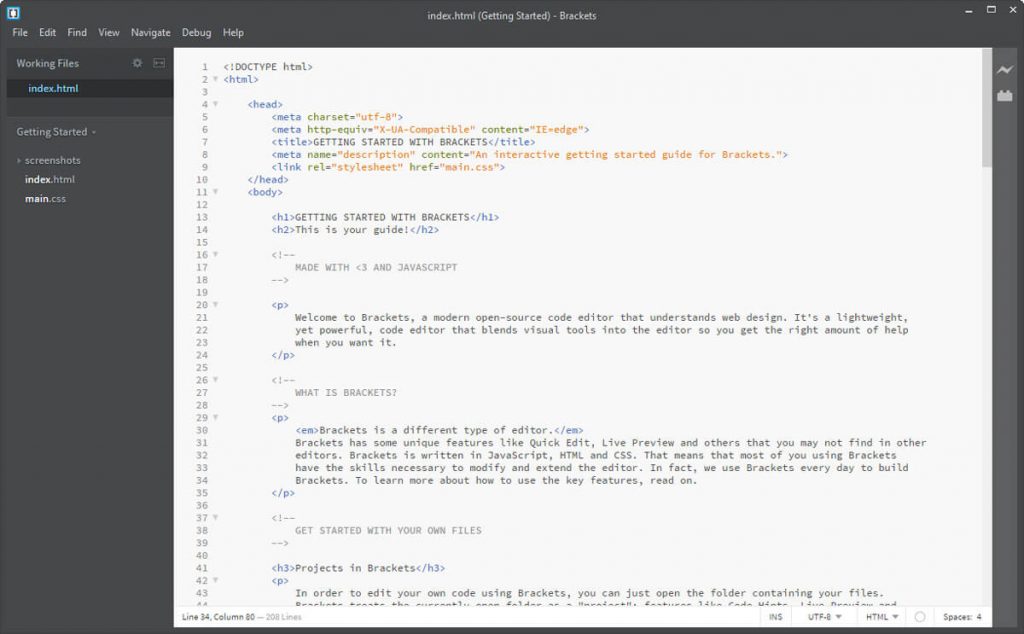 If you are a web programmer then you’ll love Brackets and it certainly deserves its place on my list of Notepad++ alternatives. Having a reasonably good knowledge of web development I was keen to jump in and give Brackets a try. The first thing that struck me was the modern interface which has a very clean look about it.

Don’t think that this uncluttered interface means that Brackets doesn’t have a lot of features because it does. This powerful text editor hides away the many features from view to make things uncluttered for you. Brackets will highlight syntax which helps with your coding efforts. There’s also a split-screen function for easy comparison.

I liked the many keyboard shortcuts available and when I was editing CSS and HTML I could use the live preview feature to see all of my edits come to life in a web browser which was excellent. You can download a version of Brackets for use with Windows, Mac and Linux and it’s excellent for editing web pages. 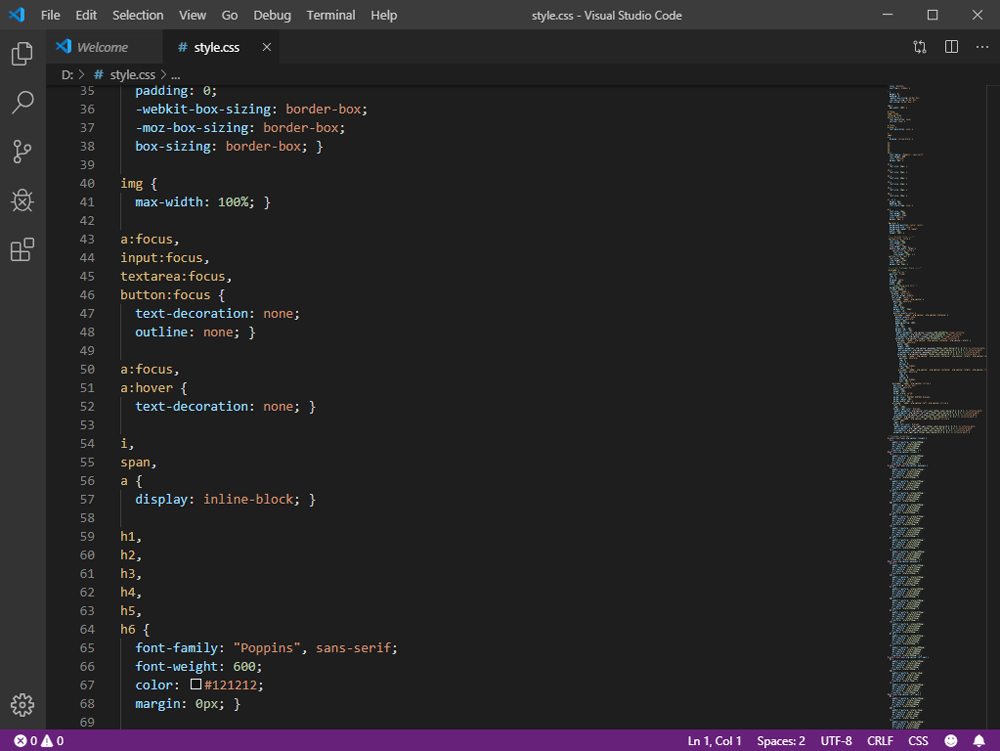 If you are looking for a text editor that will assist you to edit and debug your code then Visual Studio Code is a good Notepad++ alternative. When I first used Visual Studio Code I found the really minimal interface quite surprising. If you want even less then you can go into “Zen” mode that hides almost everything.

I liked the tabbed browsing which other good text editors have as I wanted to work on several files at one time. I was able to use sections entirely devoted to code debugging and there were other good features such as the viewing of command outputs and calling the built-in command prompt.

If you aren’t a programmer then Visual Studio Code isn’t for you. One of the things I found annoying with this editor was how difficult it was to change some of the settings. But other than that it did a good job and the debugging feature really helped me. A final positive was the ability to select and edit code that you want to change all in one go. 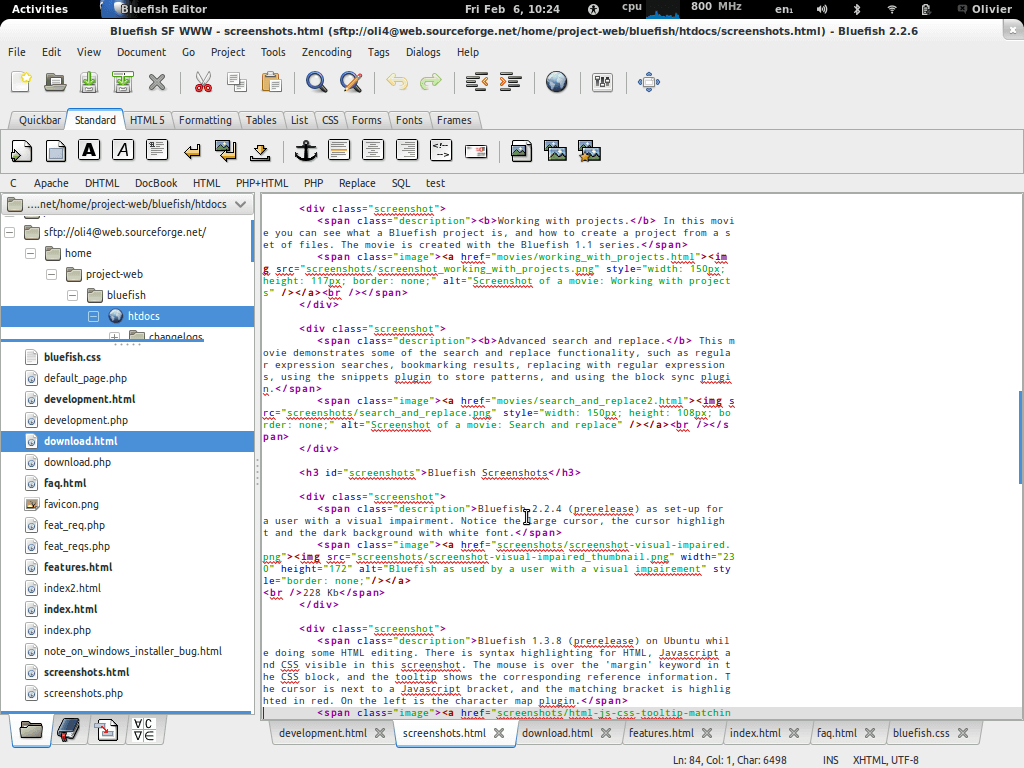 Here is another good free Notepad++ alternative. You can use BlueFish on your Linux, Mac or Windows computer and one of the really good things about this text editor is that you can work on a large number of files at the same time and it will still operate as fast as with only one file open.

The interface with BlueFish has more clutter than some of the others and there are stack of toolbars and tabs on view. I really liked that BlueFish had very good code snippet support and it is pretty easy to integrate external programs. I found this text editor pretty easy to use after I got over the initial shock of the fairly cluttered interface.

As a freelance web developer, I appreciated the fact that with BlueFish you have a remote editing function. It was good that BlueFish had syntax highlighting like most of the other Notepad++ alternatives and the syntax checking feature was good too. This text editor has support for most programming languages and it does a great job.

The Final Verdict on Notepad++ Alternatives

If you are a web developer like me then Brackets is a very impressive text editor that has a ton of features. I was also impressed with BlueFish but I would go for Brackets if I could only have one of these applications.

For people that are fairly new to the world of programming then Vim makes a lot of sense. It is very easy to customize it and if you need help then the documentation available is top-notch. If you have a lot of programming experience then you will probably like what Atom has to offer.

About Prayas Chakma 69 Articles
A tech enthusiast, cyber-junkie and geek lover. Passionate about helping others with their smartphone and computer-related problems. When he's not at his PC, you can find him riding his motorbike.

If you ask most people to name a website where you can stream movies and TV shows then most of them are going to say Putlocker. For many years Putlocker was the go-to website for [read more…]

Many people use Adobe Illustrator to create vector graphics and there is no doubt that it’s an excellent tool for this. But the problem is that Illustrator is expensive and out of the reach of [read more…]

WinRAR has been around for a very long time. It uses a proprietary compression archive format called RAR and this came about as a good alternative to the ZIP compression format because the files were [read more…]